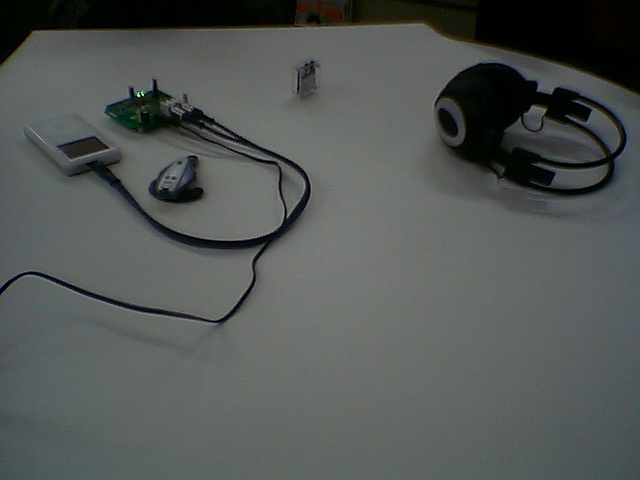 Yesterday, I had a chance to play with a bluetooth headphone that was just announced at CeBit. It supports both audio+headset profile.

(this is a prototype, not a final product) 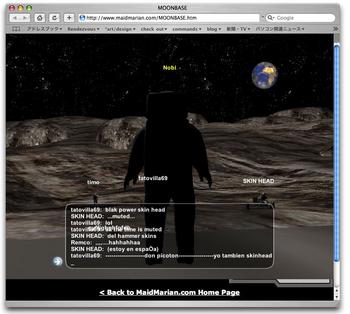 I read about this interesting Web site called MOONBASE on Going My Way.

It is a shockwave contents that let you walk/drive on the moon.

When I visited there last night (Japan time), there wasn't a sould and I enojyed the silence of the moon.

「practice Spanish on the moon!」の続きを読む

Some spammers amaze me with their creativity. They are so smart to invent new way to by-pass anti-spam filters.

I always wish they could use that creativity for something more productive, something they can be proud of and say to their children and their parents that they have "INVENTED IT".

It is very sad that they had to use their creativity in such way.

At last, there is a true bluetooth phone for the Japanese market.

It is made by Toshiba for au (KDDI). It was just announced today.

And RBB Today has that story.

Looking at Orkut, I am surprised to see how this world has become one.

There are communities about drama such as 'Sex and the City' and I see people from all over the world, the US, Japan, Italy, etc. are enjoining this community.

So was fotolog which was a one big global community.

It wasn't in fotolog's interest to become a larger commercial entity. It was their choice and I respect that. But it was sad to see their server not keeping up with the pace of growing membership.

Another sad thing with fotolog is they didn't bother to support Unicode.

Many Japanese member have found they can type their comments in Shift-JIS and it would display correctly but it was working only because their browser was set to display Japanese as the default script and their browser detected Shift JIS.

If you have tried to mix Japanese characters along side with Portuguese, you are in big trouble.

The only solution to solve this problem is to support Unicode, more specifically UTF-8.

Many 'made in USA' technology supports only ASCII. Sometime they would display special Latin diactirics or CJK characters(i.e. Chinese, Japanese, Korean) properly. But it is working only accidentally.

Fotolog, just recently, has done something wrong (again) with their server. And now they are not displaying Japanese characters correctly. I see fotolog is losing support from their many Japanese paid members. This was all expected.

And I believe the same would happen with Orkut and many blogs which uses different character codes; many of us have already been experiencing with Trackbacks not displaying properly, etc.

Of course, it's not just the Americans who are to be blamed. I like the new Japanese Social Network Service called Mixi. I think they have done many things right. But they have done one thing wrong and that is they are not based on Unicode. So if I make a bilingual friend who speak both Japanese and Spanish, I cannot send/receive Japanese/Spanish combo messages.

People, wake up! It's the 21st Century and we have to base our code on Unicode!

So orkut, do the right thing before it is too late! Today, some people have alreadt started hacking the system to use Japanese characters; and if you take a look at the Japanese community (at Orkut), you would see it's not only the Japanese who are doing this!

Perhaps, we need a "Unicode" badges for web page and raise awareness about the importance of supporting Unicode.