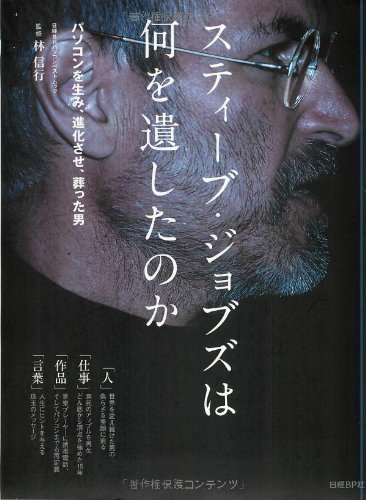 In the book above, we have nicer pictures of Hirose. But for this blog, I am using the photo I've taken with my iPhone

Yasuyuki Hirose and Steve Jobs first met each other at West Coast Computer Fair.
Hirose was in charge of developing a new business for ALPS. They had not done much business in the computer industry but one of his co-worker told him that a new computer device called "floppy disk" may become a good business for ALPS. They had started developing the device and exhibited it at the Fair and found an U.S. distributor.

Later, that distributor got orders of floppy disk drives from Apple. So Hirose started making visits to Apple. After a few visits, Apple had signed a deal with ALPS to purchase the floppy disk drives.
Apple asked for Shugart S390 compatible floppy disk drive. So ALPS made it and delivered it in March 1980.
Hirose thought the 86-millimeters thick Shugart S390 drive is almost empty. He believed ALPS can produce it much thinner. And so he did.

Back then, the capacity of floppy disks was so low that the OS and applications couldn't fit into a single disk; the Apple II users often had to swap disks to continue working on it.

"If we can make the disk drive half as thick, we can fit two disk drives in the same space; so people can put the disk with OS on one drive and disk with Apps in the other" thought Hirose.

One day, Hirose was waiting for Jobs with that new double drive in his hand.
As soon as, he saw it, "Sexy!" shouted Steve Jobs.
He decided to sell it as an Apple product instantaneously.
The drive was later named "DuoDisk" and became one of the hottest selling products for Apple back then.
It was selling so well that ALPS had to change the shift at their factory. Some of the factory workers even brought their family to help them according to Hirose.

rival in the closet: the tragedy of the original Macintosh

After "DuoDisk", Steve Jobs started working on the original Macintosh.
One day, he took the bullet train to Miyagi prefecture to visit ALPS factory in Furukawa-city.
Jobs had a rather big sack on his shoulder.

As soon as he arrived at the factory, he opened the sack, pulled out the Macintosh prototype and made Hirose sit in front of the machine. Then Jobs in half-sitting posture started explaining what it was all about.

Jobs wanted Hirose and ALPS electronics to make the floppy disk drive for the original Macintosh; so he left three of Apple employees at Furukawa factory.
But then the tragedy had happened, and the history turned otherwise.

Back then, Bob Belleville was leading the Macintosh hardware engineering team. He took a look at ALPS floppy disk drive and thought it was inferior to Sony's drive. And Belleville, without Steve Jobs permission, made a deal with Sony to supply floppy disk drive for the original Macintosh.

If you have read one of the Steve Jobs' biographies, perhaps, you have read the story about a Japanese guy hiding in a closet. That guy is Hidetoshi Kamoto (not Komoto as spelled in Walter Issacson's book) and he is the guy from Sony.
He had to hide in the closet because back then, Steve Jobs had believed that original Macintosh would come with ALPS floppy disk drive but instead Belleville invited Kamoto of Sony to Apple and made him do the work.

Looking back at this misfortune, Hirose says "I understand Belleville. We had not worked during the 5" floppy drive era (i.e. Apple II). He didn't know that how we can catch up at the final production stage. Also back then, we didn't know if the Macintosh's floppy disk will be 3" or 3.5". So we had been working on both standards while Sony focused on 3.5" which they invented. They had some advantage in quality."

After the original Macintosh shipped, Steve Jobs left Apple and Hirose believed he won't see Steve Jobs again.
But in 1996, Steve Jobs made a dramatic come back to Apple and in 1997, Steve Jobs started to run the company again.

One day, ALPS got an invitation to Apple Campus in Cupertino, and Hirose made the visit.
It was the product briefing for the iMac.
In the hallway, Steve Jobs found Hirose and mischievously told him "Yasu, our relationship started with a floppy disk drive but do you know iMac doesn't have one?"
"I know" replied Hirose.

Although iMac didn't ship with ALPS floppy disk drive built-in, Apple asked ALPS to manufacturer the keyboard and the round mouse.
I, Nobuyuki Hayashi, the author of this blog, missed the introduction of the original iMac in May 1998, but was at the MACWORLD Expo New York 1998 (and WWDC '98) where Steve Jobs had done an official unrolling of the iMac to general consumers. I can't recall if it was in the Keynote speech or at the following press conference, but Steve Jobs clearly stated that iMac's keyboard and mouse were manufactured by ALPS which I found very strange. Usually, Apple doesn't disclose the suppliers. But maybe it was because of the friendship between Steve Jobs and Yasuyuki Hirose.

On October 6th, 2011, Hirose found out about the passing of Steve Jobs via several e-mails he received that morning.
Upon recalling the sad news, Hirose said "It was all too brief. Such a great man. Such short life. I've realized how transient one's life can be."